Carelessness can get you killed. 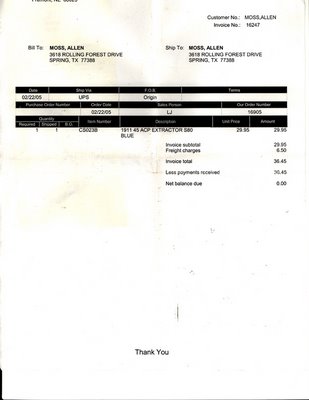 Step One. Due to poor reliability of his .45 1911A1, Mr Moss purchases a blued extractor from Cylinder and Slide. Good quality product. Recieved as expected. No problems. 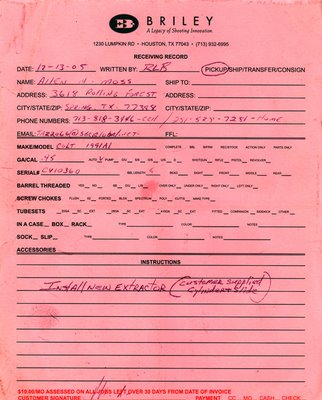 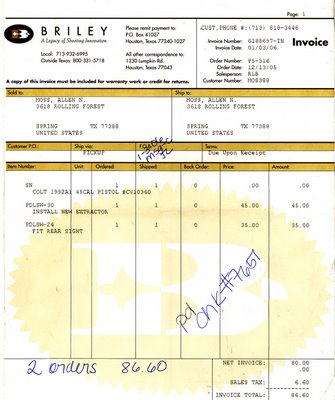 Briley finishes the work. Mr. Moss observes that although the Cylinder and Slide extractor was blued, the installed extractor is stainless. Mr. Moss confronts the Briley salesman about the difference. After a visit to the shop, the salesman advises that Mr. Moss' extractor was lost in the shop and another extractor of unknown origin substituted. Mr. Moss pays $45 (extractor installation) and receives the salesman's promise to replace the extractor with one of like quality.


Step Four. Mr. Moss decides to get a quote for installation of a King's barrel bushing. He chooses a gunsmith on the east side of Houston because he is uncomfortable with Briley's professionalism. In addition to the quote, the gunsmith is asked to look at the extractor installation. The gunsmith determines that the gun is unserviceable and replaces the stainless extractor with Mr. Moss' original (unreliable) extractor.

Step Five. Mr. Moss visits me and asks me to examine the extractor. I advise Mr. Moss that the gunsmith was right. The gun was unserviceable.

WHY? No one cares.

Step Seven. The extractor Briley installed (below) is not a .45 ACP extractor. What is it? It an extractor for a .38 Super and the claw has been amateurishlly butchered. It would never have been able to hold a cartridge case rim. Completely unserviceable. Mr. Moss knows that this extractor could have gotten him killed in a "social situation"

Realizing you still don't have a reliable street gun: priceless.

There are some places where money can't buy quality.